It's true, this week (wednesday) I am turning the big 3-0!
I am beginning to understand why "older" people say that each decade gets better. Though by my next decade I may be seeing some wrinkles or gray hairs or a few extra pounds or whatever, I can definitely appreciate the wisdom that each year will bring. Being there, doing that, experiencing this, surviving that.
I am definitely most thankful for my God and Savior. This past 10 years has by far been the most learning time of my life in my spiritual journey. I am so thankful for the influences that God has brought into my life and the churches I have been a part of during this time.

But this surely was an eventful decade in my life and I thought I should definitely look back and remember what has transpired these past 10 years!
I guess a big part of this decade was lots of travel. I am guessing kiddos are going to slow things down in that department. :)

That's this decade in a nutshell. How much I look forward to the next 10 years and the fun it will be to see our expanding family take shape and see how God directs our path. So, so thankful for my 3 biggest blessings that have come to me during my 20's - namely my hubby, my son, and coming daughter.


Every good gift and every perfect gift is from above, coming down from the Father of lights with whom there is no variation or shadow due to change. James 1:17
*And be sure to stop back by on Wednesday for my annual birthday give-a-way!! :)
Collected Thoughts by kellyH 3 comments:

Is there any wonder why this boy keeps us cracking up?
(and is SERIOUSLY into head gear right now!) 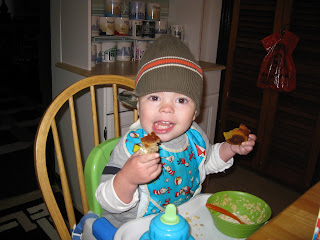 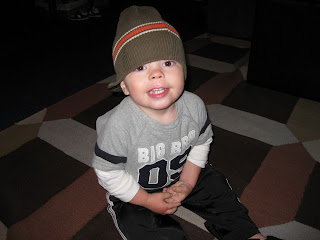 and big boy unders! which are in slight hiatus right now. :-) 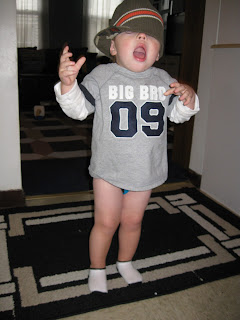 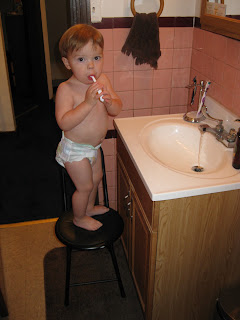 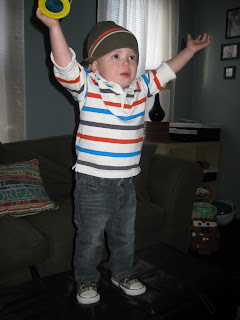 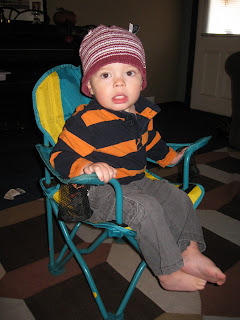 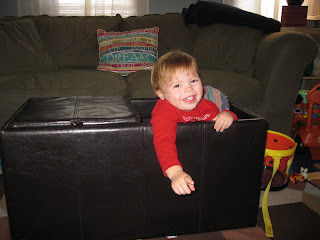 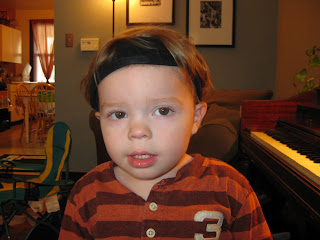 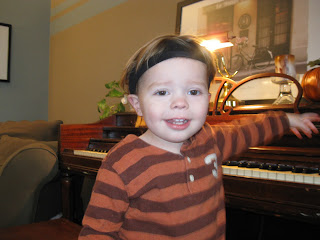 *Thankful that my hubby gets to attend the Evangelical Theological Society Conference.
*Thankful that he is having a wonderful time and wonderful fellowship.
*Thankful that Graham is at a fun age where daddy being gone for 3.5 days doesn't put me over the edge. :0
*Thankful for friends to hang out with and a busy schedule this week in which the time is actually going quickly.
*Thankful, no estatic, that we ended up with 2 date nights this week. Monday night & Friday night!
*Thankful for God's daily grace in our lives and getting encouragement exactly.when.needed.
*Thankful for sharing so many giggles with my son. Like when I drop a sock on the floor and he laughs like I am the world's funniest person ever. Yes, you can stay this age forever, little G.
*Thankful for Andrew's job.
*Thankful for my little side jobs of child-care and piano lessons.
*Thankful that after I thought daylight savings time had officially ruined my mornings, G is back to sleeping till 7:30. Those 10 days of 6:30 wake-ups were stressing me out!
*Thankful that after our first little boy destructive incident (G snapping my glasses in two), CoastalContacts.Com was offering a free pair of glasses! What amazing timing, very thankful! (Even though Andrew graciously offered to tape my old ones back together.) :-) And those who know him, know he.wasn't.kidding.
*Thankful for my sweet little family and can't wait to see how Eden fits in.


Oh, taste and see that the Lord is good to us.
Ps. 34:8
Collected Thoughts by kellyH 1 comment:

I was contacted thru my momtourage site about a local restaurant that wanted me to come in and try their fare and then be given a gift card to give away on my momtourage blog.
(Locals, stay tuned!)
Now that has been a tasty unexpected perk of my mom's group! I have now been contacted several times about trying different products, doing give-a-ways, free museum passes and other great opportunities! I do put a lot of time and effort into it each week, so having these little perks has been extra fun!
I figured this would be a really fun date night and it definitely was!
So we headed out to the Sonoma Grille last night!
Heading downtown, at 8 pm, can it really be? Lovin' it. 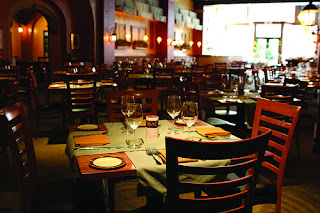 The Sonoma Grille is billed as "California Eclectic" and specializes in local, sustainable, and organic foods.
Bottom line: it was delish!!
They had also told me that while it was no problem to bring my hubby, the portions would be for one person. No problem, we ate dinner first, fully expecting a few nibbles of whatever they would offer.
They first trotted out to a selection of five of their appetizers. 5!! 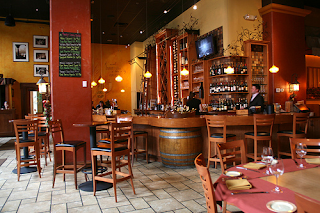 ﻿We ate what we could, we were unbelievably stuffed. Poor Eden gained 5 lbs in one hour. Yes, it was totally Eden doing the gaining, not me. :)
I seriously felt full all day today!
So a big thanks to the Sonoma Grille and for a fun & free date night!
Collected Thoughts by kellyH 1 comment:

If you need me, I am napping.

The last 3 days have been a little eventful. Seriously, everyone I know is having/had/gonna have babies!

*edit* our babysitter had an emergency and had to cancel. Date night: moved to couch. :-/
Bring more chocolate.
Collected Thoughts by kellyH 1 comment:

So, in light of little Eden who will be needing the crib in a few short (!!) months, we decided it was time to make the switch to the big boy bed! I think probably every child is different, and some parents do it at 18 months, some do it when they're 3. We already had a spare twin bed, so we decided to skip the toddler bed altogether, which is seeming to be no problem. But we felt he was ready, so we first added the bed to his room for a day or so and let him get used to it. He was SO excited about it. In fact, he would run around in circles like he'd just eaten a snickers or something! So then, day #2, we put him in it for nighttime. He's such a great sleeper, and because I felt he was ready, I didn't really anticipate any problems. He was so excited to get in and sleep in it, but as soon as he realized that he was actually expected to sleep in it, he had a small moment of panic and some very sad tears! So he cried for about 20 seconds (mourning the loss of his babyhood, perhaps?!!) and then was out like a light. YAY! I was a little more anxious about naptime, but so far, he's done absolutely great, doesn't get out of bed and sleeps his regular 12.5 hours at night and 2 hour naptime. Double YAY!
I could be wrong, but I feel like we're still reaping the benefits of the sleep-training in his early months. I feel like the kids that I know that were really trained to sleep well in just the first 3-4 months of life, overall seem to make these kinds of adjustments well. Graham, even this young, recogizes when he's tired and wants to go to bed or nap, because he knows that he feels better when he does! Anyhoo............. that's my not-so-subtle babywise plug. :)
We don't have his room completely finished yet, but hopefully I will get to put up some pics sometime of transformation from nursery to little boy room. He is just loving it! 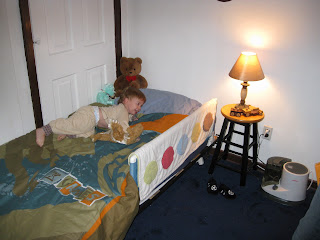 Notice how his dot blanket somehow made the move from side to pillow. :) 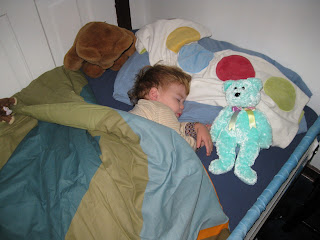 He loves sleeping with his bears and has to account for the 4 he sleeps with before he goes down!
One of my favorite new things is now laying in bed with him for his before bed storytime.
And he ALWAYS wants to sing the b-i-b-i ( also know as the b-i-b-l-e). What's that spell? "bible", he says. Yes, genius, we know. :) :)

Sweet dreams, my little boy, growing up so much!
Collected Thoughts by kellyH 6 comments: