Birthday mania has begun....as in 3 birthdays in 12 days!
Andrew's day was pretty low-key. I and the kiddos have been battling sickness for about 2 weeks. It appeared to have cleared up for the weekend and then Monday we all got hit hard again. So beside not feeling well, we've both been up a lot at night with Eden who sleeps terrible when she's not feeling well. :-/
I am so, so thankful I had made a lasagna & breadsticks last week to take to a family with a new baby and said baby had not arrived yet (although ironically, the baby was born on his birthday!), so I was able to pop his favorite meal right out of the freezer. I am sure God knew I was going to need that for this day. :)
But we managed to make Deep Dark Chocolate Raspberry Cake with a yummy Marshmallow Buttercream Frosting. Although the inside did not look exactly like the picture. Pinterest shocker, I know. :)
Graham's card says, Dad, You the best. You are special. I love you. Happy Birthday to you. And he signed all our names. :) Graham & Eden LOVE their daddy. As soon as Eden hears a key in the turn she starts squealing "daddy!"  G's favorite thing is to go somewhere with daddy. Daddys have a big responsibility being in the hero category. The post-dinner nap lasted about 30 seconds. I think Andrew would have preferred longer. 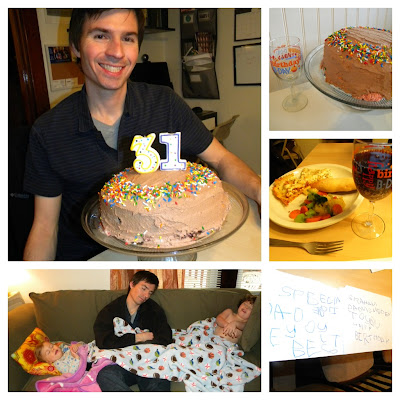 Happy birthday. To you.
Collected Thoughts by kellyH No comments: 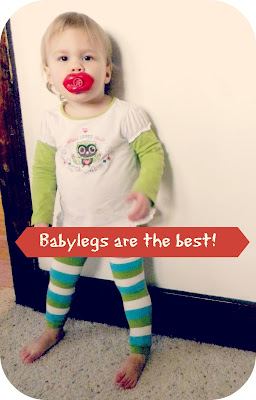 Well, they say girls are easier to potty-train than boys, but let me tell you, I think I got pretty lucky here. For every mom that says "I just used this sticker chart, sang this song, and fed a few m&m's and bam: potty-trained" you have 10 moms that have pulled their hair out for months, done loads upon loads of laundry, and cleaned up more pee than they want to see in their lifetime. So when people ask me about Eden's potty-training I am very clear: I had little to do with it. I got really lucky. :) The thing that most surprises me is that she comes and tells me when she has to go. I still often have to force Graham away from what he's doing sometimes to take a potty break.
When kiddos train before 2, did you know it's really hard to find underwear that fits? At first she was swimming in 2t/3t, but that's the smallest I could find. I actually ended up using a lot of those little diaper cover pieces that often come with little dresses. If at 12 months they fit over a diaper, at 18 months they fit a bum perfectly. :) I also hate kids stuff with cartoon characters on it...finding underwear without that? Good luck! But Old Navy came through for me. 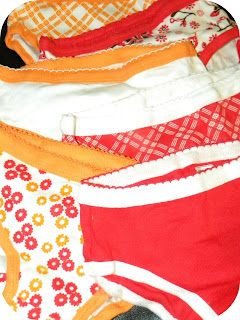 At 15 months she started asking to go in the potty and I would sit her on it and she would go. What? Half the battle right there. At 18 months we gave it an offical full-time try, but ultimately decided she wasn't quite ready. At 22 months she decided she hated wearing diapers, so it was definitely either train or start cleaning up a lot. She has had very few accidents and even mostly stays dry during naps and overnight. Hello polar opposite of Graham.
Seriously, it's like magic.
I used no sticker charts, candy or songs.
We cheer when she goes potty.
Yay for simple motivations.
It's really cute at 11pm when she goes and starts half-heartedly clapping and saying yayyyyy........yawn. :)
Took a few weeks to get #2 in the potty, but she seems to be getting more consistent. I'm still keeping her in pull-ups for now when we're out & about till we're 100% in that area.  The only down-side: the nights. Graham has yet to stay dry at night and doesn't seem to care to that much. Eden, not so much. So she's been waking up 2 or 3 times a night for the last few weeks. Really not fun. Can you just pee in your diaper, really? :)
After almost 4 years of cloth diapering, I am beyond excited to have a break. I think CD moms are twice as excited when their kids potty train. :) Although, we could get a baby in the next few months, but for now I'll enjoy it!
Good job, big girl! (and thank you very, very much.) 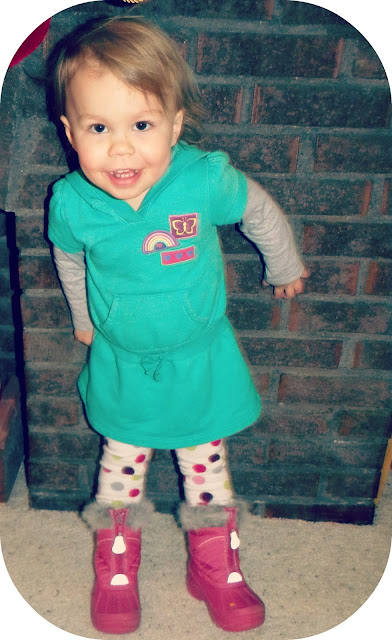 Well, this seems to be old news now, in the busyness of the holidays I didn't have time to stop and write about it. But most of you know that as of the beginning of December, Andrew began full-time at Three Rivers Grace Church as Director for Media, Music & Outreach. Ever since we began our seminary journey 7.5 years ago, this has been the desire of our heart to work full-time in church ministry if the Lord would open the doors. God led us on a different path than we would have anticipated, but knowing that "all things work together for good to those who love God", we fully trust in His sovereignty and are grateful for the different opportunities we have experienced along the way. Even knowing many of our friends from seminary days are still in those journeying days, waiting with full anticipation this transition as well, we know that God in his perfect timing has the perfect scenario already in place and can't wait to rejoice with you as God reveals that plan!
So what does Andrew do? Well, his job decription was approximately a page long and ended with something like "and whatever else comes up....." :) He will continue as he was in his part-time role to oversee the worship services each week - planning the services & music, coordinating & leading the worship team, scheduling monthly music team practices, overseeing purchases & planning for the AV team, and whatever else might go into a Sunday service. He also is overseeing a new church directory, involved in helping launch our new church website, re-designed the church bulletin and writes it each week, & re-worked the church's phone number (which now goes to his phone). If you are a small church where the church number is going directly to the pastor or staff member, you should definitely check out what he did with a google number! It is a neutral number that can be routed to any different number at any time, i.e. the pastor goes on vacation and so it can go directly to someone else. And there's lots of other amazing features - technology is so great!
Here are some the other thing he's been involved with this month:
*
So you can probably get a sense that he has plenty to occupy his time. :) He is loving it and loves being involved in such a wide variety of tasks. Because he loves what he is doing so much, at times I have to be sure he is not working 70 hours a week. :) He is using our home office in the basement as his home base. It's worked out pretty well because he is well out of sight of the kiddos, but he can still come up for lunch or snacks. :) The flexibility has been amazing. The other day we were both able to go to see Sesame Street Live with the kiddos on a weekday morning (we had received free tickets). We've also had greater flexibility in finishing our fostering requirements and getting all those appts. done. {We are excited that all we have left is our home study to be fully certified!}
The one thing that has been the most challenging to adjust to is the what can feel like the random chaos of his schedule. He has so many meetings this month which may range from a 6am Saturday elders meeting to meeting someone for coffee at 8pm at night. So it feels slightly unpredictable right now and will definitely take a few months (at least!) to adjust to how everything will be. We've also always been able to get along on one car since we've moved to Pittsburgh as Andrew has always been able to take the bus to work. But right now he is jetting all over the city suddenly and this mama has been feeling a little housebound! :) So we may have to think about adding a 2nd car here in the future. But we are so thankful at how God opened this opportunity and love serving in whatever capacity we can at our church. We are excited to see how our church is growing and the greater capacities of ministries where doors are opening up.
Collected Thoughts by kellyH 2 comments:

Particularly when mommy is not home and faint-at-the-sight-of-blood daddy is on duty. Particularly when mommy's phone is in her bag in the grocery cart and she doesn't notice she missed 4 calls till 45 minutes later.
Anyone that has seen our little monkey walk up & down stairs without holding on to anything (since she was 18 months), leap from one thing to the next, scramble up to the top of big brother's new bunk bed, or a myriad of other hold your breath stunts knows a trip to the E.R. was inevitable. This one apparently involved standing on a child chair that tipped over and landed the back of her head of the corner of the cabinet. Poor Andrew. Poor Graham. Andrew is trying to be calm for Graham but these things really do freak him out. He accidentally let out the word ambulance in one of his frantic messages to me and then I hear Graham start wailing and saying, "my sister, my sister!" It was so sweet how distraught he was for her. He was a big helper to daddy fetching phones, wipes, & ice packs, and then stroking her back for a long time.
So mommy finally arrives home and Eden & I head to Urgent Care. I was so dreading the drama of when Graham got stitches on his eye around this age. But they put a topical numbing cream on it and one quick staple and she didn't even cry. Luckily, mommy had a candy cane in her purse and she managed to wrap the male nurse around her finger and came away with about 20 stickers. :) So other than a 3 hours late bedtime, she doesn't seem any worse for wear and slept soundly all night. 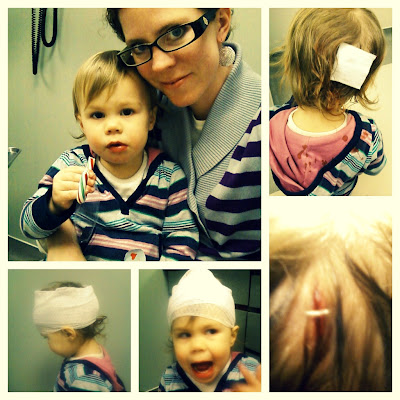 Collected Thoughts by kellyH No comments: